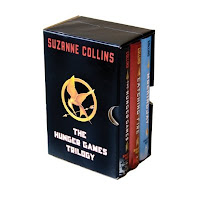 Katniss Everdeen, living in a future society called Panem, was born and raised in the poorest of districts, district 12 and she dreads the occurrence of the annual Hunger Games. This “game” requires each district to provide 2 tributes, one boy and one girl, whom the Capitol throw into a manipulated arena where only one rule exists, kill or be killed; the last one standing is declared victor. Fate and Chance fall upon Katniss, forcing her into the arena as well as a series of gruesome and agonizing events with co-tribute Peeta Mellark. Katniss inadvertently starts an uprising against the Capitol and is unwillingly turned into a symbol of rebellion and hope.

Suspense fills the pages of Suzanne Collins’ Hunger Games, causing its reader to always sit on the edge of their seats. This trilogy has something for everyone: ongoing and agonizing romance, intensity, action, and cause for contemplation. Read Hunger Games and experience the anxiety of the Arena.
Posted by ken at 7:00 AM 1 comment:

Even though the time between signed contract and release of a picture book can be quite long (2+ years), one of the fun things that happens in between is getting to see the illustrator's initial sketches of  the book. Just last week, I received the sketches for "Cow Can't Sleep", which comes out fall of 2012. I love the sketches! They're a lot of fun, and will make Cow Can't Sleep an even funnier story. I wish I could post them for you to see, but I can't. However, to give you a feel for the style of the illustrations, you can see examples of some of the art done by Steve Gray (the illustrator for Cows Can't Sleep) at his web site at http://www.stevegrayillustration.com.
Posted by ken at 7:00 AM 2 comments:

To gather more insight into the ebook versus printed book debate, take a moment to participate in the poll below:

Note: I apologize but there is an error on the 4th line of the first poll question. It should just say "Read or plan to predominately read ebooks". Unfortunately, blogger doesn't give me a good way to fix this without starting over.

Indicate any of the following factors that would motivate you to read ebooks over printed books:

Indicate any of the following factors that would motivate you to read printed books over ebooks:

If you read or plan to read both printed content and digital content, indicate for which of the following areas you would most likely use an ebook reader:

If you read or plan to read both printed content and digital content, indicate for which of the following areas you would most likely read printed content: